Matt and I just got home from an awesome weekend! He said he had more fun this weekend than he's had all summer. He really does love those triathlons! Hanging out with awesome friends/cousins is not bad either!

We arrived Friday night to register and attend the triathlon meeting. The bikes were all lined up the night before in their transition zone. Kinda nice, since the race started at 7am. 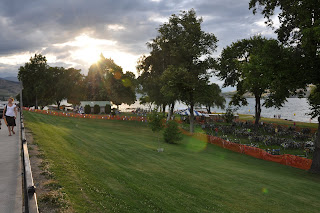 Saturday we watched Julie start her half iron. She was amazing!

At 8:30 I started my half marathon. The course took us along the lake...so beautiful and hardly hilly at all. It was one of the best runs I've been on, and definitely the best race ever! I got 1:54:11 which is a PR for me. 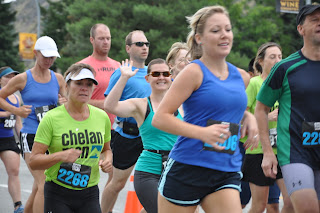 After I finished racing, we spend most of the early afternoon waiting for Julie to complete her bike and run. We had an awesome view of the race, we could see both bikers coming in, and runners going out. 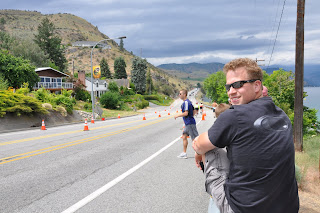 After the race we went back to the ball park where we were camping. The sun came out! It rained off and on all of Saturday. The rain was actually quite welcome, as it is hard to run in the heat! We wore our awesome neon shirts. :) 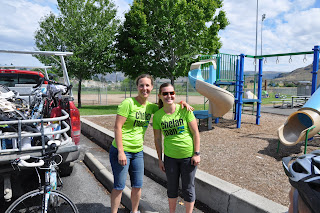 The next day, Sunday, was all about Matt! His race was a sprint triathlon and only took 1:29. It was quite the work out, just running and taking photos of all the events. Here he is coming out of the water: 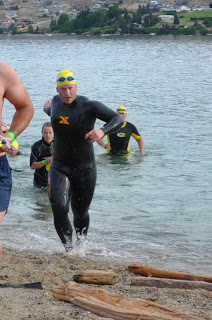 He was very organized in transition, preparing for the bike and the run. I was so proud that he put everything in a nice straight line: 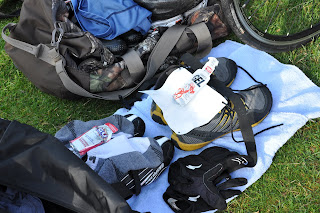 And here he is at the finish! Now that he has finished his sprint triathlon, he is excited to compete in Coeur d Alene on August 13th....in the Olympic distance. Go Matt! 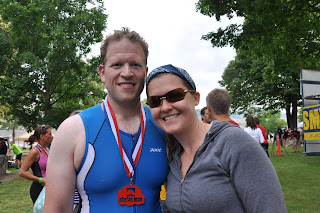 After the race we watched the Splash & Dash, the kids triathlon. What an event! Probably the highlight event of the weekend. :) Matt and I took the kids home to Seattle to stay with their grandparents. That was fun! We even stopped for DQ ice cream. :)

And now back to being healthy again!
Posted by JennV at 9:05 AM

JennV
On any given day, you might find me at a coffee shop drinking a hot latte. Or I may be training for or running a half marathon. If I'm not at home, I may be adventuring in the great outdoors, even if that means walking at Green Lake. I tend to scrapbook like a fool and photograph everyone and everything in sight. I am super lucky to be married to my best friend Matty.